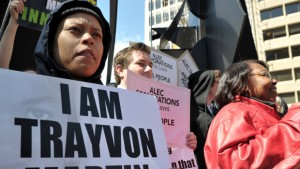 (The Nation) Trayvon Martin was not innocent. He was guilty of being black in presumably restricted public space. For decades, Jim Crow laws made this crime statutory. They codified the spaces into which black bodies could not pass without encountering legal punishment. They made public blackness a punishable offense. The 1964 Civil Rights Act removed the legal barriers but not the social sanctions and potentially violent consequences of this “crime.” George Zimmerman’s slaying of Trayvon Martin — and the subsequent campaign to smear Martin — is the latest and most jarring reminder that it is often impossible for a black body to be innocent. Read the rest of the story here.