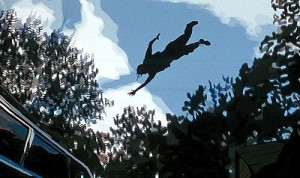 1. The man in the boat/car states that his vehicle is a window to the world, in which every moment is a show. He glides along, remaining in a state of constant departure, while always arriving. The ride, he states, does not require an explanation, only occupants. This scenario parallels Hume’s problem of personal identity: our identities seem to consist of fleeting perceptions. Hume was troubled by this problem and felt that our minds in fact construct a more lasting notion of the self. The boat/car man, though, seems to live out Hume’s worst fears. What’s so bad about how the boat/car man approaches life?

2. Wiley attends a philosophy lecture by real life philosophy professor Robert Solomon, at the University of Texas at Austin. Solomon is lecturing on existentialism, presenting it optimistically as a philosophy of creative freedom. After class Solomon tells Wiley that he disagrees with postmodernist philosophy since it views humans as social constructions, the mere confluence of forces, fragmented, and marginalized. This gives people excuses for their behavior. Existentialists like Sartre, though, feel that we are responsible for our actions, and this responsibility stems from human freedom. We should not, Solomon argues, see ourselves as victims of various forces. Do we really need notions of freedom to give us a sense of responsibility?

3. Wiley visits the home of Kim Krizan, a screenwriter who discusses the nature of language as a system of signs. The fact that we can create words that refer to tangible things, such as a tree, is not really remarkable. What is remarkable, she explains, is how words convey abstract concepts such as love or frustration. When we say these words, and people understand us, it amounts to a kind of spiritual communion. That feeling might be transient, but, she thinks, it is what we live for. Is the conveying of abstract notions as rewarding as she contend?

4. Wiley visits Eamonn Healy, Chemistry professor at Austin. Healy discusses human evolution and the values that are associated with it: parasitism, dominance, morality, war, predation. In this scheme “the individual is at the whim of the collective.” He then states that we are beginning a new kind of evolution, which involves bio-technology (artificial intelligence, neuro-biology), which will occur much more rapidly, and involve a new set of values: truth, loyalty, justice, freedom. Here the individual becomes more valuable in its own right. Healy seems to be somewhat optimistic about futuristic human-robot life forms. Is there some grounds for his optimism?

5. The man who sets himself on fire argues that society hasn’t given us an opportunity to voice our opinions beyond the rather meaningless voting process. He feels this way in particular since his particular message is destruction and chaos. The issue isn’t one of censorship but of audience access. What’s so important about having an audience for our opinions, especially if we’re ignored – just as bystanders ignored him as he was burning to death?

6. The couple lying in bed together (from Linklater’s movie “Before Sunrise”) discuss a version of Chuang-tzu’s dream paradox: a man dreams he’s a butterfly, but he might really be a butterfly dreaming that he’s a man. The young woman thinks that her waking life might be the memories of an old woman in the last moments of her life. The young man suggests that recent studies of the brain activity of sleeping or dying people show that a lifetime of experiences can could be condensed into a few actual minutes of activity. If this is true, does this make the “all is a dream” hypothesis any more compelling?

7. The couple also discuss the notion of collective memory, a view articulated by Rupert Sheldrake, which involves a large pool of knowledge that we all draw from. The young man states that this would explain seemingly spontaneous world-wide innovative leaps in science and the arts, prompted by people working independently of each other. “Once the answers are out there, we can all pick up on them; it’s like we’re all telepathically sharing our experiences.” Is there a more simple explanation to such world-wide innovative leaps?

8. The prison inmate’s ranting are especially troubling: he wants to torture everyone responsible for putting him in prison, yet he is incapable of seeing that he is precisely where he needs to be because of his anti-social inclinations. Assuming that he is incapable of grasping his own guilt, does he deserve any less punishment than a similar person who understands his guilt?

9. Wiley visits UT Austin philosophy professor David Sosa, who argues that there’s not much room for free will. Classic philosophers believed that God set things up in advance. More contemporary philosophers maintain that humans are just a system of molecules. The big bang set up the initial conditions, and our human lives are just the playing out of the subatomic particles. This picture, he argues, threatens the idea that humans have a special dignity. Does determinism necessarily undermine human dignity as Sosa suggests?

10. Sosa argues that the indeterminacy of atomic particles does not give us a model for acting free: this at best explains random behavior. Sosa says that he’d rather be a gear in a big deterministic machine than some random swerving in a probabilistic system. Do you agree?

11. Libertarian talk show host Alex Jones appears driving through the city speaking through a PA system mounted on his car. He argues that we are being conditioned on a mass scale to give up our freedoms, which society does by making us feel pathetic and small. Instead, Jones argues, we should embrace the “creativity and the dynamic human spirit that refuses to submit.” Isn’t it worth giving up some of our creative freedom in exchange for security?

12. English professor Lisa Moore sits in a restaurant with author Carole Dawson discussing the problem of human identity over time. They discuss a theory by Benedict Anderson that we need to construct a story in order to connect, for example, a photograph of ourselves as an infant with who we are now. Anderson seems to have in mind fictional stories that we create. Suppose that I attempt to create a fictional story about my past in which I would be the forgotten heir to the British throne. Wouldn’t historical reality keep my fictional account in check?

13. The monkey in the classroom expresses the views of Steve Fitch, a photographer and musician. According to Fitch, art is the language that humans created to distance ourselves from our empty and degraded human past and reach for a new world. Do you agree?

15. The drunk man at the bar, played by actor Steven Prince, defends gun ownership. The bartender agrees and states “A well armed populace is the best defense against tyranny.” When Prince accidentally shoots the bar tender, he is shot in retaliation (a tragedy based on a real event). Is there a gun control message here (Linklater states that he was intentionally ambiguous on the issue)?

16. The second half of the film, which focuses on lucid dreams, explores the philosophical issue of appearance/reality, much the same way that Descartes in the Meditations raises the question of whether he is dreaming. One character argues that, “to the functional system of neural activity that creates our world, there is no difference between dreaming a perception and an action, and actually the waking perception and action.” Descartes raised the issue as a matter of theoretical doubt about the real world. Does the above scientific theory make the dreaming/waking problem any less theoretical?

17. Filmmaker Caveh Zahedi discusses a theory by André Bazin: film is a record of God in the sense that we are all God manifest at different points in time. The more that a film is bound to a narrative storyline (rather than recording the spontaneous expression of the actors) the less it is a record of God. Film is best when it preservers these “holy moments”. Why should a spontaneous moment be any more “holy” than a planned moment, such as an actor reciting a script?

18. Poet David Jewell, in conversation with Zahedi, points out the various layers awareness when attempting to engage in the “holy moment” such as the holy moment itself, and one’s efforts at achieving this moment. Some people claim that they can strip away all the extraneous layers and experience the pure holy moment itself. Are these people lying?

19. A gang of intellectuals roam the streets, spouting philosophical one-liners. They see an old man who was on a telephone pole for no apparent reason. One of the gang comments “he’s no worse than us; he’s all action and no theory, and we’re all theory and no action.” Is there any way to determine what the best balance is between theory and action?

20. Wiley bumps into a red-haired women in a stairwell, who laments that people behave like they’re part of an ant colony – acting out of efficiency and politeness – with no real human engagement. D.H. Lawrence calls such engagement the confrontation between souls. This also parallels Martin Buber’s distinction between I-It and I-Thou relationships. As with Buber’s theory, we can ask this woman: do we really want to live in a society in which all of our encounters with people involve genuine human engagement?

21. Poet Timothy “Speed” Levitch meets with Wiley on a bridge and states that self-awareness consists of discovering that one is a dream figure in another person’s dream. Taken literally, this has implications for Wiley’s current dilemma. For the rest of us, who are not dreaming, what is the more metaphorical meaning of Levitch’s point?

22. Wiley’s last encounter in the film is with a man playing pinball, played by director Richard Linklater. Linklater relates a theory by Philip K. Dick (author of Blade Runner and Total Recall) that it’s really 50 AD, but there’s an evil spiritual force trying to make us forget that the kingdom of God is immanent. Time, according to Dick, is just a continuous distraction. Linklater then relates a variation of Dick’s theory that he once had in a dream: the year that we’re stuck in is not really 50 AD; instead, there is only one instant, and in this instant God is asking us whether we want to be one with eternity. Time, then, us just our constant saying “no” to God’s invitation. Do these theories have any merit beyond their initial shock value?

23. In the DVD filmaker’s commentary, Linklater states that a good dose of scientific skepticism needs to underlie far out ideas. Or, as he says, extraordinary claims require extraordinary proof. He states that he enjoys the strange theories nonetheless. Why might a skeptic like Linklater give a hearing to strange theories that he’d ultimately reject?